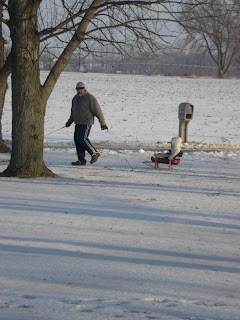 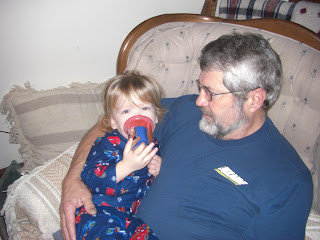 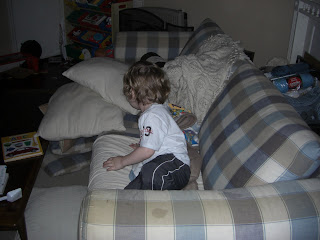 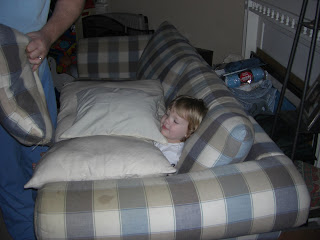 daddy piles on the pillows 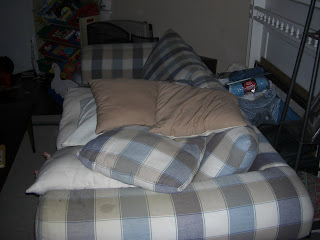 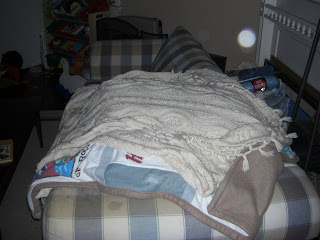 "okay!" (parents watch as the mound starts shifting and listen to the sounds of a Joseph hard at work) 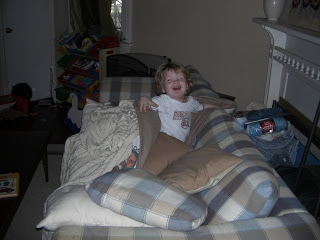 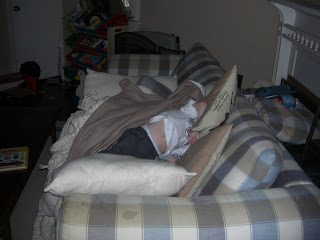 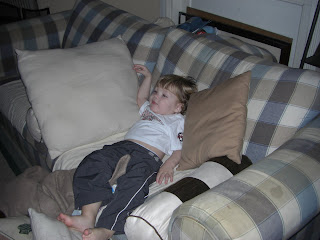 According to his growth chart - Joseph is approx. 38 1/2 inches tall. I say approximately because it's hard to get him to actually stand still and straight long enough to actually measure.

Joseph can spell and recognize his name. We're working on writing it. He loves to write but most of his letters look remarkably like Os.

Joseph will sit on his potty for long periods of time with no results. The little booger holds it until about 30 seconds after the diaper is back on.

His vocabulary improves every day and he is very able to express himself. There is just a bit of confusion with pronouns - i.e. "I hold you" . . . instead of "hold me"

He is very, very, very independent. He wants to be the one to open the refrigerator door when it's time to milk or juice. . . . and when it's time to put it away. He also wants to open the car door, get in the car himself, get in his seat, get out of his seat, get out of the car, lock the car and close the door. Mama has to be very creative and secretive in how she "helps" with these tasks.

Joseph loves to watch movies on his portable DVD player and knows exactly how to start, stop, fast forward, rewind and switch from full- to wide-screen.

He also loves to instant message daddy on the computer. . . . . I tell him which letters to type to say what he wants to say and then he pushes the "send to daddy" button.

He loves to make up fun games. Currently the best game of all is to take every pillow in the living room and pile them up. Many "sub-games" can be made from out of this pile - climbing, hiding, sliding, etc. Another very fun game is insist that Doggies quack instead of bark and then giggle infectiously. And on of our favorite games - play shark and "chomp, chomp, chomp" with our hands until they're close enough to tickle Mama. . . . . Mama's hands are also good at "chomping" Joseph.

We did a little rearranging in Joseph's bedroom a couple of months ago and set up one whole side as a Little People village. He will play for hours with his Little People. Amazingly enough all the people in the village know how to use the potty in the house and make it flush. I keep hoping that they'll be a good influence on Joseph.

Joseph is swiftly outgrowing all of his clothes. I've been buying up 3t/4t clothes at garage sales and on Ebay. He is in 3t and some 4t on the top and finally getting into 3t on the bottom although I think some of this 24 month shorts will still fit him this summer.

It's no secret that Joseph loves "Mamma Mia!" The word has spread that when you turn on some ABBA, Joseph will sing and dance. It's a nifty little parlor trick but it also comes in handy when you're trying to keep the kiddo entertained while on a trip or somewhere . . . . like. . . let's say the salon. Miss Alison (our wonderful beautician) gave a little heads-up to her shop owner on Monday and we were not there for 10 seconds before the familiar sounds came through the system. I had also come prepared with the portable DVD player and the movie and at one point the same song was playing over the speakers and coming out of the DVD player. Would have been even better had they been in sync.

Check out Nicole Green's blog for some amazing pictures of my sister's family. 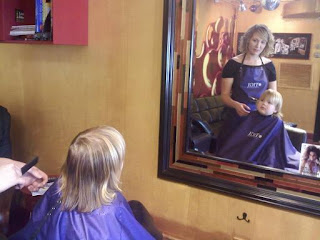 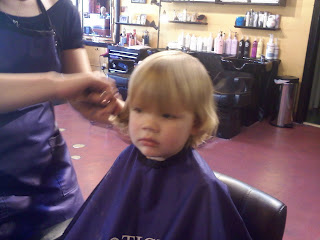 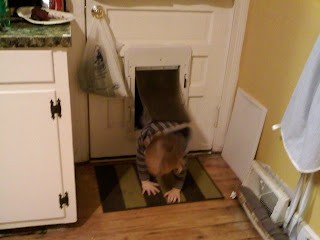 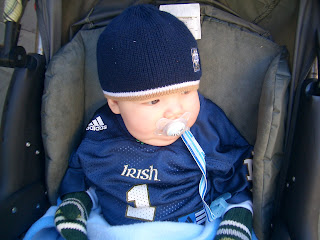 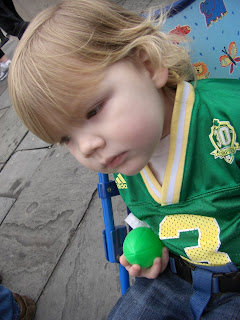 The great thing about being a Notre Dame fan is that you always have something to wear for St. Patty's Day! :-) 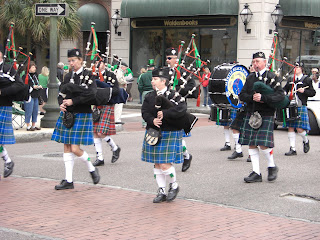 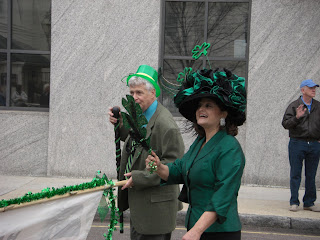 day at the park

we have a new park around the corner from our house and we explored it for the first time yesterday. apparently it's been there for awhile but it's pretty small and we just didn't know. Joseph had a great time exploring the jungle gym and the giant checker board. there are also these beautiful little community garden plots behind it about which I'm trying to find more information.

One of those days

You know it's going to be one of those days when, at 9:15 am, your kid is in his second outfit of the day and you're still in your pajamas.

Since we live in such a busy part of town we turn on a radio in Joseph's room for nap time and at night. It is tuned into a local Christian station. He gets a daily dose of music and preaching of the Word and I often hear him singing along when he wakes up.

Through tears I thanked God for this precious boy and prayed that those words would always be on his lips.

I've added the song to our playlist.

in case you're wondering - it's not that I don't want to post more pictures. it's just that I don't seem to have very many that aren't blurry these days. joseph just doesn't slow down very often!