Stressterated: what Joseph says instead of "Frustrated."

I personally think it more accurately describes the feeling.

Holidays are becoming more fun now that Joseph is old enough to appreciate them. For Valentine's Day, Joseph decorated our kitchen windows (and then moved everything higher once he realized his baby brother could reach them) and wrote his own name on the cards for his school friends. 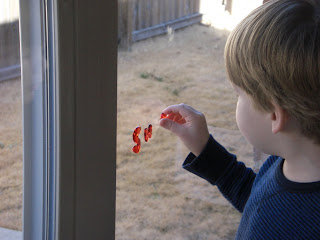 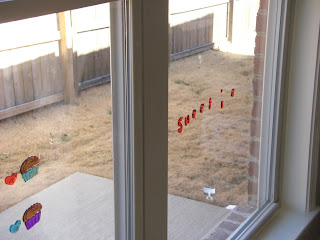 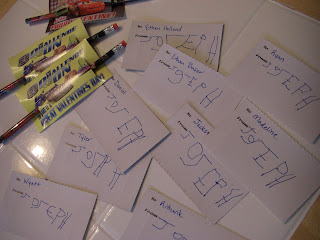 Then we got 7 inches of snow and Little Rock shut down. 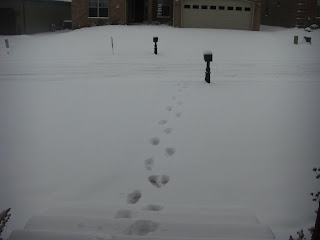 Joseph's party at school was postponed. But as it ended up taking place on the actual day instead of the Friday previous, well, it was probably better. Joseph's craft at church that weekend was also Valentine related. 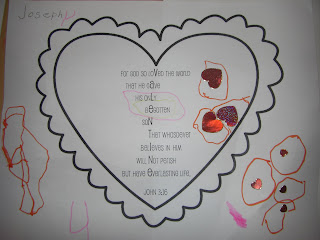 On Monday Joseph got to go to school and have his party and pass out his valentines. He had been a little concerned that his friends would forget to get him valentines. This was probably heightened by watching "Happy Valentine's Day, Charlie Brown" the day before. He did not need to be afraid because he came home with a whole bag of cards and candy. He and daddy had also made a few stops on the way home and brought home some goodies to surprise mama too! 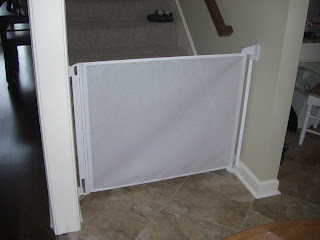 Our new baby gate arrived yesterday and Christopher installed it last evening. We couldn't put a traditional tension gate at the bottom of our stairs and I also didn't want a gate that would swing open and stick out into the kitchen. So I was excited to find this retractable gate online. No more chasing Baby Jacob off the stairs. Although I will say that I did adorable how he would giggle and speed up when he would see a clear path to the stairs. 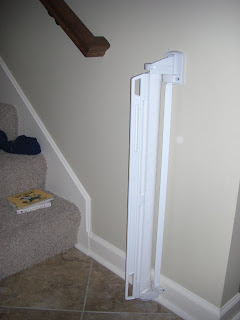 nothing is worse than having two little kiddos with coughs, sore throats and runny noses. Well, unless Mama & Daddy have it too. We are armed and dangerous with orange juice, tissues, cough drops, peppermints, menthol camphor, tylenol, nyquil and Jack Daniels (for the mama & daddy.) 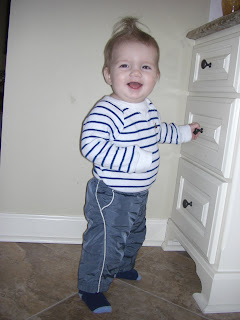 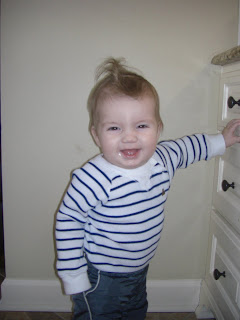 We recently bought this clock for Joseph's room. He has a weird interesting fascination with clocks and spends a good part of his day telling me the time. I was a little bit afraid that having a clock in his room would put a damper on the whole sleeping thing. But so far he seems to be well rested (although I'm still watching for the dark eye circles). And now his arrival downstairs in the morning and after naps is even more predictable. The clock itself is pretty sweet. Not only can you read the display on the actual rocket, but it projects it onto the ceiling (along with a picture of the moon or earth or planets). 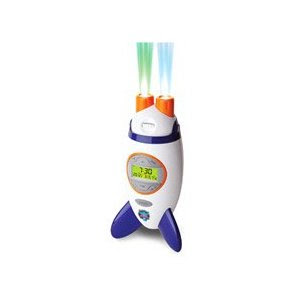 I can't believe our baby is almost one! Jacob celebrated his 10-month birthday while we were in Chicago. For the second month in a row he got to celebrate with his cousin Scout. . . . while she celebrated turning 5 months old. They are beginning to interact with each other and it's adorable. Much to Joseph's delight, Jacob is also interacting much more with him. Joseph is very good at getting giggles out of his baby brother. He really wishes that Jacob was a little tougher and could stand up to some full-on boy wrestling. . . . but that will come soon enough.

At 10 months old, Jacob is:
Crawling
Pulling Up
Cruising the furniture
Standing on his own
Climbing the stairs (see below - really must get the baby gate so mama can relax just a little)
Says: mama, dada, hi and uhoh
Eats: pretty much anything and everything. I have begun just mashing up his food instead of pureeing. We have also moved on to table foods as I want him to get used to eating what we do. He loves pasta, bread, rice, lentils, bananas, sweet potatoes, applesauce, cheerios, pears . . . (and dessert, shhhh.)
He is fiercely determined and has a great facial expression to go with it.
He loves his bed. He's a great occasional snuggle bug but when he's tired, he just really wants to be in his bed. On the other hand, I foresee him climbing out of his bed sooner rather than later. Joseph only started getting out of his bed (yes, even his big boy bed) on his own in the past year. I think Jacob is not going to let a silly thing like a crib stop him.

We love watching his little personality develop and love, love, love the joy he adds to our family. 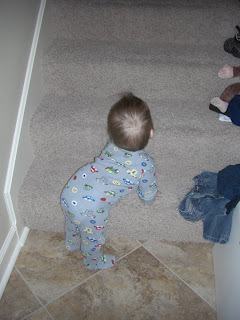 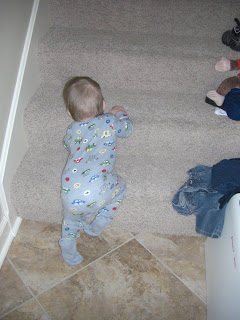 My dad has been in Africa for the past three weeks and we have been planning for quite some time to surprise him in Chicago upon his return. 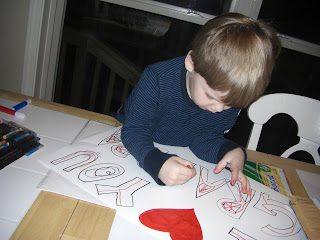 Joseph worked diligently on a couple of posters before our departure.

We were on the road before dawn last Sunday and met up with the rest of the family in Chicago. My brother-in-law found a pretty sweet deal at the Omni on Michigan Avenue and we were spoiled rotten for a couple of nights. 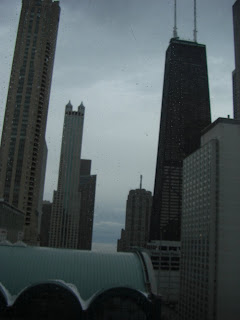 The view from our corner suite. (Can you see Lake Michigan?) 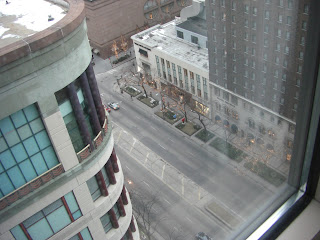 Looking down at Michigan Avenue. 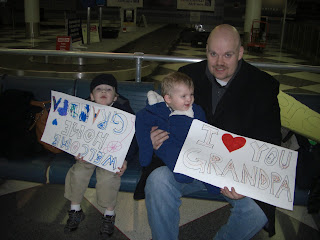 After breakfast (and a little shopping) on Monday morning we took the train to O'Hare . . . 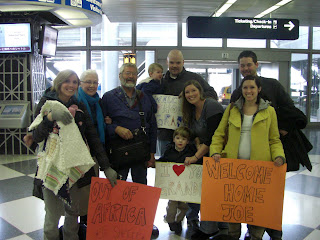 . . . where we totally and completely surprised my dad. We announced that he would be spending one more night away from home and then took him to Ditka's for a fabulous steak dinner.

Our original plan was to drive home to Little Rock on Tuesday morning but you may be aware that Chicago was hit with a blizzard on Tuesday. We detoured out of the city and were able to miss the blizzard. However, we did enjoy an overnight with ice and snow in Indianapolis and another little stop in Nashville. Our little weekend trip turned into a 1200 mile loop and we got to see most of our family (on both sides.) Isn't life an adventure?!

A few weeks ago we had Jacob dedicated at our church. We were so thankful to have some of our family join us for the celebration. 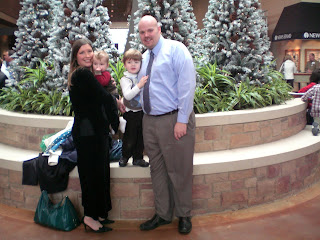 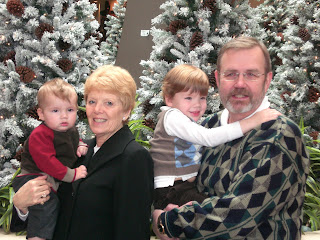 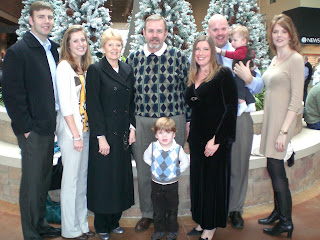 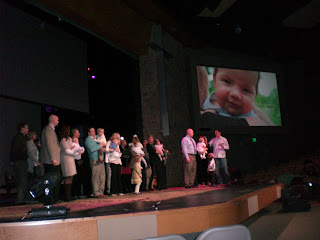 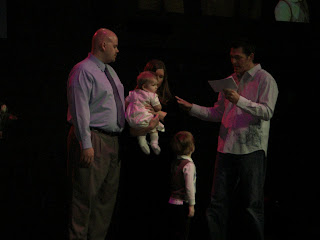