There is nothing like a wrapped Christmas present to motivate a laid-back kiddo to crawl. 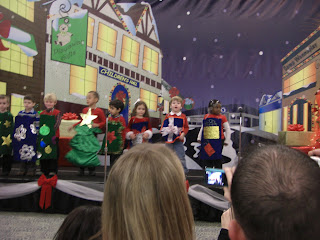 The best gifts under our tree 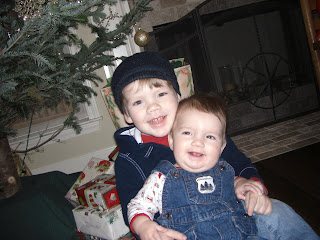 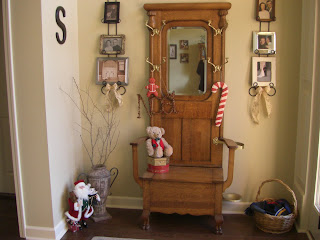 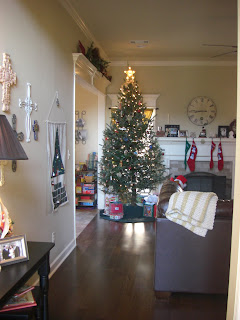 . . . . to be sick.
We've taken both of our kiddos to the doctor recently. A couple of weeks ago Jacob was being snuggled by the sweet nursery workers when I picked him up after Bible Study. They said that he hadn't been his normal, cheerful self that day and that he felt warm. He was running a temp of 102.5. It hadn't broken by the next day so Christopher took him to the clinic. Of course, by the time the doctor saw him the fever was gone and they couldn't find anything wrong. Silver lining - since he was scheduled for his second flu shot in two days and had no fever - they went ahead and gave him the shot.
The following Sunday evening we returned home from community group to find Joseph running a fever. He had no other symptoms and said that nothing hurt. The fever continued at about 101.5-102 for the next 24 hours and then he started throwing up. So the next day (Tuesday) we took him to the doctor. They thought he possibly had strep throat although the initial culture came back negative. We were told that we would find out for sure by the next afternoon. We were scheduled to leave Wednesday morning for Nashville for Thanksgiving but did not want to risk exposing our family to strep so we decided to stay put. On Wednesday afternoon we found out that Joseph did not have strep. However, he was still running a fever and was exhausted from being sick for 3 days. In addition, we were now going to be home for Thanksgiving and had no food! There is no silver lining to having to go to Kroger the night before Thanksgiving. His fever finally broke later that night. We had a lovely little Thanksgiving dinner of Honeybaked Smoked Turkey Breast, Green Bean Casserole, Scalloped Potatoes and Pecan Pie. The family of a coworker of Christopher took pity on us and invited us over in the evening for their dinner. Joseph surprised us by rallying and was a total trooper for the meal.
The silver lining of being in Little Rock for Thanksgiving was that we were able to get our house cleaned and all of our Christmas decorating done (except for the tree) on Thanksgiving day. We did end up going to Nashville on Friday morning for a very quick weekend trip. 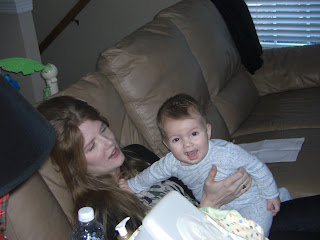 Every morning when Joseph wakes up, the first thing he says (after the appropriate "good mornings") is, "may I check the calendar on your phone please, mama?"

After getting my phone and checking the calendar he makes a beeline to his work table to change his calendar. 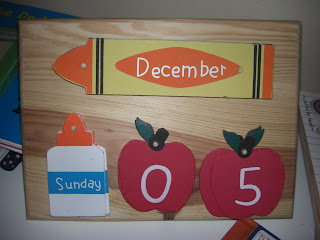 Now that we are into the Christmas season Joseph has added three more items to his morning ritual. Second stop: the stocking holder countdown until Christmas. 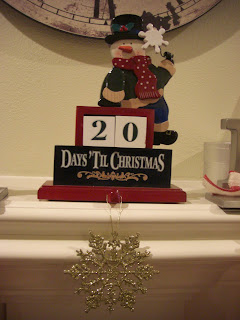 Then we head to the drawer in the kitchen to open a tab on the Cars Advent Calendar. (This was sent to him last year from a family member and since it arrived in a decorated envelope, I just put it under the tree. Since it didn't get opened until Christmas, we are using it this year. 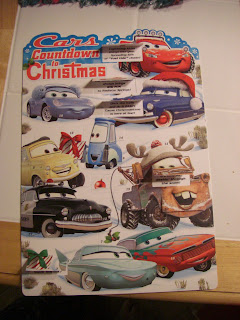 Finally, he heads to our latest Christmas decoration addition - the Advent Tree. Here he takes a miniature ornament out of the appropriately numbered pocket and hangs it on the tree. (I got this idea at Moms N More a couple of weeks ago and was thrilled when I realized I already had everything I needed to make this except for the dowel rod and paint for the numbers. I even had enough mini ornaments for the pockets!) 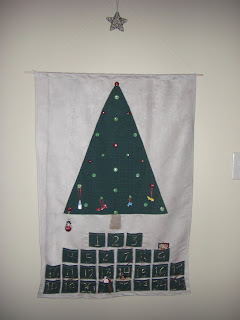 I'm sure there's more. The updates are coming. Stay tuned.